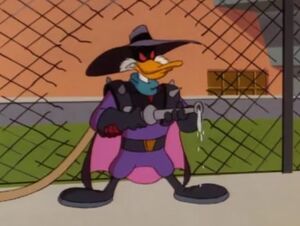 Darkwarrior Duck is a "Darkwing" from an alternate timeline which point of origin is the disappearance of Gosalyn Mallard during a reconnaissance mission. The corresponding Darkwing Duck presumed she had run away because he failed her as a father and turned into a despirited wreck. Only due to a mix-up did he resume his career and the part of him that is prone to exaggeration gained the upper hand. Soon, St. Canard was without villains and that's when Darkwarrior Duck arose. In need of purpose, Darkwarrior targets civilians for whatever he can, from unhealthy life choices to lack of etiquette to not keeping to whichever rule Darkwarrior periodically comes up with since the day he has made himself dictator-protector of the city. Surpassing his old self in professionalism, Darkwarrior has replaced Launchpad with an army of flying robots and relocated his base of operation from Audubon Bay Bridge to St. Canard Tower.

While Darkwarrior can, technically, still be considered a good guy, he is very different in his crime fighting style than his old self. He whole-heartedly believes in the use of lethal force, does not give criminals a trial and freely deals out death to those he deems to be evil. A sharp contrast to Darkwing's non-lethal style. Darkwarrior also sees every crime equally as heinous, right down to tearing off the 'do not remove under penalty of law' tag on pillows.

Darkwarrior Duck retains Darkwing's signature hat and cape, but now wears a (jump-suit like) purple costume with a dark belt, dark boots, large black gloves and heavy, spiky armor over his shoulders. His belt has a satchel on it for his former gas gun. His mask is also black now, and when he wears it his eyes glow red. Darkwarrior has a legion of flying robots at his disposal, a large tank (presumably in place of the Ratcatcher), a heavy plane (loaded with guns and missiles), and his former gas gun (now a handheld missile launcher).

During a mission to investigate a scheme by Megavolt and Quackerjack, Gosalyn goes missing. Darkwing believes she has run away because he told her to stay put instead of let her come along and loses his zest for crimefighting. Launchpad does his best to help by taking him to various crime scenes, but the villains practically walk over them. One day, the two are scouting at the elementary school and Darkwing spots a man trying to steal a girl's doll; a girl that looks a lot like Gosalyn. Helping her brings back the hero in him, only one who is seeking to compensate. Which each criminal stopped, Darkwing grows a darker side until St. Canard is free of crime and he starts harrassing and controlling the population in order to create a perfect city. He fires Launchpad for not being on board with his new take at heroism and acquires an army of flying drones to assist him instead. His world is rattled when one evening he responds to vandalism of a statue of his and find the perpetrator to be Gosalyn. He saves her from the missile he fired and blames Launchpad for the defacement of the statue. He tried to convince Gosalyn to join him in his cause, and imprisonned her when she refused and told him that he became twisted in his views. Gosalyn escapes with Megavolt Quackerjack and Launchpad, and prevents DarkWarrior from killing the other two time-travelers, only for him to brandish his gas gun that he turned into a missile launcher at her. He even declares that all her past misbehaviours meant she was a bad egg from the start. However, he finds himself unable to shoot her, as he just can't hurt Gosalyn. Launchpad knocks him over, giving the three time travelers time to get back to their timeline and set things right. "Time and Punishment"