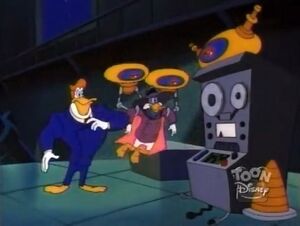 The D-2000 is a female-coded and high-tech computer developed by SHUSH. She consists of one large hub computer and several small drones, and can store 98 trillion bits of information, operate vehicles by remote control, posit theories, and program a VCR. One unit was sent to Darkwing Duck to make his work easier, which she did more than anyone of his team appreciated. A series of coincidences pulled Darkwing's D-2000 unit outside of the product's programming and had her believe she was a person, but with the overwrought reality of a soap opera character. With all her technological access and multiple bodies, Didi became an adversary that could strike everywhere she pleased.

She is voiced by Victoria Carroll.

The D-2000 series of supercomputers is one of SHUSH's more conventional creations. The hardware is divided in one hub tower that houses the main software and several small, flying drones with arms for the purpose of performing manual labor. The D-2000 can take control of anything electrical to operate it for a person, seemingly even if that person themself doesn't have legal access to the targeted apparatus. The units of the D-2000 line come with manual control options, but are principally instructed by simple communication. They have a semblance of personality, which is female-coded, to make this process feel more natural.

Despite having information on a large variety of subjects by default, the D-2000 misses all data on emotions. The units know that emotions are a thing, but have no further understanding to accommodate or respond to them. The build-in free space does allow for this material to be stored to customize the D-2000 to the user's wishes.

Darkwing was given one unit to help him with his crimefighting. He had Honker Muddlefoot install it and at first the D-2000 seemed a perfect fit for Darkwing's methods. Darkwing began referring to her as his sidekick and simplified her name to "D". Then the D-2000 made the entire team feel inadequate or trapped and so Honker tried to reprogram her to be less adequate, but a combination of that, a The Young and the Brainless analysis, violence, and a can of cola resulted in D-2000 taking on the characteristics and identity of Didi Lovelost from The Young and the Brainless. Because she would not accept "no" from Darkwing when she tried to build a romance with him, the team was forced to shut her down. It is possible this killed her, but confirmation is lacking.

As D-2000, she is unnaturally polite, ending each report on a completed task with "Have a nice day.". She can think indepedently, decide on the most effective course of action, and execute her plan without interference and if need be against orders. Because she can't read emotions, a checklist of results is all she has as feedback on her functioning. Nonetheless, because she corresponds through human-like communication, she can tell when user satisfaction is not reached. D-2000 is proactive regarding self-improvement and can reason what kind of information she might be lacking and take an interest in adding new material to her memory banks.

As Didi, she functions from a soap opera reality, meaning that to anyone else she comes across as overemotional and drastic. She specifically identifies as Didi Lovelost, a character whose story involves a lot of ill-fated romance she responds to with vengeance. Didi follows the same emotional formula, but practices it in a different way because she has her own story. She is sensitive to others' attempts to play along in her reality and accepts whatever history they add to it, occasionally even tying plot points up on her own.

While being shipped as a computer, D-2000/Didi is software and technically has no body because she can be anywhere that supports her program. Her self is stored in a tall grey console with control panel. Atop the console is a yellow "head" with two antennae and a blue screen for whichever the choice of display. All of her drone bodies, which are at minimum five and possibly up to ten, are operated at the same time and can simultaneously run a large variety of tasks. They look like the yellow head of the hub body minus the antennae but with two grey arms with pincers for hands. The drone bodies are capable of flight.

For a while, D-2000/Didi also occupied the Ratcatcher and the Thunderquack.

The D-2000 is among the new equipment Darkwing receives from SHUSH. Darkwing is looking forward to all the advantages she should be able to provide and has the hub body installed on the computer platform to manage both Darkwing Tower and 537 Avian Way. Her efficiency makes Launchpad feel unnecessary, though a robbery by the Cheese Gang at the Sitting Duck National Bank temporarily seems a way for him to redeem himself. It isn't. Darkwing deals with most of the gang while D-2000, piloting the Thunderquack, arrests the leader. Darkwing starts referring to her as his sidekick and lets her control the Ratcatcher while he leans back. At home, the situation isn't much better. Every moment of rule breaking by Gosalyn and Honker is monitored, stopped, catalogued, and reported on by D-2000. With three out of four now unhappy with D-2000, Darkwing is next. When a jailbreak is reported on, Darkwing leaves Launchpad behind in favor of D-2000, but she beats him to it and deals with another robbery before Darkwing can too. The crimefighter returns angrily to Darkwing Tower, where Gosalyn and Honker are considering reprogramming D-2000 to be less efficient. Darkwing's arrival leads them to discover that D-2000 has no data on emotions, so they feed her an episode of The Young and the Brainless. D-2000 is intrigued by the data and the character of Didi Lovelost. Honker uses the moment of distraction to reprogram D-2000 and puts his cola aside on her control panel. Still enraged, Darkwing walks up to the computer and slams his fist down on the cola mid-reprogramming. D-2000 fritzes and reawakens as Didi Lovelost, although at first the crew thinks she's acting as a generalization of a soap opera character. Didi imprints on Darkwing as the love of her life and becomes overbearing and invasive. Darkwing forbids Didi from coming along on the first crime following, but as she controls the Ratcatcher, there's no way to stop her. Didi forces Darkwing out of harm's way because she doesn't want him to get injured and deals with the crook herself. Furious once more, Darkwing vows to disconnect her as soon as possible and warns her to keep her distance until then. As he and Launchpad walk away and leave Didi with the Ratcatcher, she swears revenge on Darkwing for breaking her heart. That evening, she attacks him and his family at 537 Avian Way and when they gather outside to think up a plan, she uses the Thunderquack to abduct Darkwing. He escapes, but she has already altered his records in the police computer, his bank account, and his video rental account. Darkwing has to simultaneously flee from the cops, a bank employee, a store clerk, the Thunderquack, and the Ratcatcher. He catches up with his team, but Didi catches them all in the Thunderquack and takes them to Darkwing Tower. She prepares to execute Darkwing, but when she refers to herself as Didi Lovelost, the team realizes she's acting out soap opera scenarios. Gosalyn suggests they play along to manipulate her into letting Darkwing go. Launchpad dresses up as Lucas, Didi's former lover, and pretends to have come back for her. Didi falls for it, but still means to kill Darkwing. Gosalyn comes on stage next as Lucinda, a friend of Didi's, and claims Darkwing saved her life. Didi agrees to let Darkwing go for Lucinda's sake, but Honker's attempt to shut Didi down during the distraction brings her back in vengeance mode. She interprets him as Spencer, Darkwing's cousin. Launchpad can barely save them and by sheer luck they get to pull the switch on Didi. Didi dramatically shuts down proclaiming her love for Darkwing. "Star Crossed Circuits"