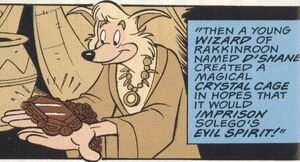 D'Shane is one of the people that lived on the island of Rakkinroon centuries ago. He was still young when he claimed his place in history as the one who defeated Solego, the Chaos God. D'Shane was both experienced in magic and close combat at the time and had to use a combination of these skills to come out as the victor.

As an inhabitant of Rakkinroon at the time of the rise of the sorceror-turned-demon Solego, D'Shane's life went from, presumably, peaceful to a fight for survival as the Chaos God neared his city. Rather than fighting him head on, D'Shane organized a trap. He created a medallion and a crystal to fit it, but kept the objects separate. Then he donned armor and approached Solego as a common warrior. Solego used a spell against him, which D'Shane returned by means of a reflective, highly polished tall shield. D'Shane's magic would not have been enough, but Solego himself could defeat him. Solego was split in two as a result and D'Shane locked his immortal mind within the crystal and made the medallion hold the demon's magic. It was presumably D'Shane too who created the jade block to hold the cursed items in and he may have also been the mind behind the Temple of Duumingluum in which the jade block was kept. D'Shane's fate after this is unclear. The civilization of Rakkinroon disappeared, but it's not clear how long that happened after Solego's threat or if there's a connection between the two events.

Despite that Solego was not happy with his defeat or his centuries of incarceration, he holds a high amount of respect for the mortal boy that bested him and compares the rest of humanity as a whole to him.

More even than brave, D'Shane is clever. He knows the limits of his powers and with that is keenly aware of what he ís capable of. This gives him a crucial benefit compared to adversaries who are stronger but less disciplined.

D'Shane is seemingly a fox of medium to tall height. He wears simple robes and tunics belonging to his culture and owns a soldier's outfit.

With Solego leaving city after city in ruins on Rakkinroon, D'Shane steps up to end his reign of terror. First, he prepares by making a medallion and a matching crystal and by polishing his shield until it has a nice reflective quality to it. After that he dresses himself in armor and faces Solego alone. Confident in his own might, Solego blasts a spell at the boy, but he casts it back using the shield. Solego's essence becomes split between mind and magic, which D'Shane locks away respectively in the crystal and the medallion. For this deed, D'Shane's name survives the ages, although the details of his victory become lost. Solego too never forgets him. The Legend of the Chaos God

Retrieved from "https://darkwingduck.fandom.com/wiki/D%27Shane?oldid=20668"
Community content is available under CC-BY-SA unless otherwise noted.