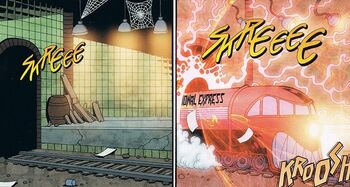 The cross-dimensional transit system is a creation of Negaduck, possibly aided by Magica De Spell. It is a reworked part of the abandoned portion of the subway system of St. Canard. As per its name, it is a structure that allows travel between the various mirror dimensions.

Magica De Spell and Negaduck return from a trip to a dimension where everyone has two heads. As with all previous dimensions they have visited, they've abducted its Darkwing, but uniquely they accidentally have left Poe De Spell behind. Magica complains on the time they spend in dimensions not their own, but Negaduck, an accomplished dimensional traveller, is not in the least fazed. Crisis on Infinite Darkwings, Part 1 Crisis on Infinite Darkwings, Part 4

Retrieved from "https://darkwingduck.fandom.com/wiki/Cross-dimensional_transit_system?oldid=19009"
Community content is available under CC-BY-SA unless otherwise noted.