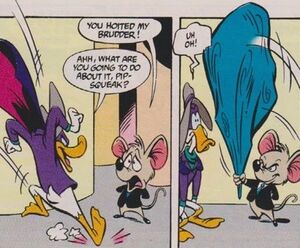 As the smallest and most harmless looking member of the Suits, Club is able to blindside his opponents with the strength he does hold. He is loyal to Pokerface and has adequate strategical insight.

Club is one of the four people brought together by Pokerface to form his gang. His favored weapon is a club about two to three times the size of his body. He and the others operate from Pokerface's office in One Chump Plaza Casino.

Although certainly not a weakling given he can handle a club bigger than himself with ease, Club does not have the benefit of size. He compensates this with strategical thinking, using his lack of height to seem unassuming and making it a point to disarm his opponents during moments of weakness.

Club is a mouse of short stature. He's got grey fur and wears a black suit without pants.

The Suits assist Pokerface in a scheme to poison the water supply for One Chump Plaza Casino with gambleholic toxin to make the patrons spend all they have. Darkwing Duck picks up their trail when the kill the city controller and crashes Pokerface's office. The four beat and tie him and Launchpad up, then leave with Pokerface to the water tank on the roof. Darkwing won't stay put, though, and comes after them. Because Darkwing himself has fallen victim to the gambleholic toxin, Launchpad has to bet him he can't defeat them to make sure he has a chance. Club is the second to face the crimefighter, performing his "little me"-act before bringing out his singature weapon. He clubs Darkwing's left foot and it seems to give him the upper hand, but Darkwing swings right back with a victim act of his own to have an open shot at Club's face with the gas gun Club has demanded to be handed to him. This takes out the Suit. Feeling Flushed

Retrieved from "https://darkwingduck.fandom.com/wiki/Club?oldid=20657"
Community content is available under CC-BY-SA unless otherwise noted.