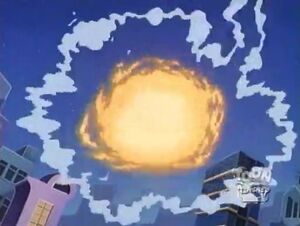 Cleanser's Comet is a famous comet that periodically is visible from Earth.

Cleanser's Comet is a periodic comet with an unspecified orbital period. It has visited Earth at least twice and once was used to almost eradicate mankind.

With Cleanser's Comet set to pass by Earth soon, Dr. Fossil hatches the plan to use a super-magnet to draw the comet in. When it hits the planet, nearly all life will be wiped out. Among the survivors will be Dr. Fossil and his involuntary collection of dinosaurs-by-retro-evolution, who are safe within the reinforced basement of the St. Canard Natural History Museum. This way, dinosaurs will become the dominant species once more. He nearly succeeds in his scheme, but his own assistant Stegmutt changes the super-magnet's direction and the comet returns back to space. Jurassic Jumble

Retrieved from "https://darkwingduck.fandom.com/wiki/Cleanser%27s_Comet?oldid=21754"
Community content is available under CC-BY-SA unless otherwise noted.