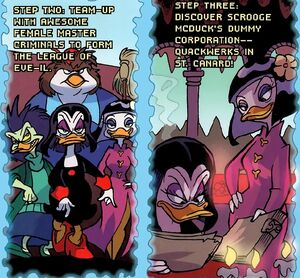 Looks cán kill and Cinnamon Teal is the one who can tell you all about it. She is a spy whose greatest asset is her gaze, with which she mesmerizes others to do her bidding. Not only loses her victim the ability to think for themself as long as Cinnamon wishes to keep her hold on them, but they also cannot remember anything from during this time if she does not allow them to. Cinnamon has done more than enough to earn her time in jail, but her powers have her well ahead of the evidence. Good old regular manipulation has a place in her repertoire too, but overconfidence makes her vulnerable to being played herself. She sometimes teams up with her cousin, Ho, whose place in her schemes is that of muscle mass. The two work well together.

Cinnamon is from the Republic of Singapore, where she is active in the spy network. She is a regular of the Cloak & Dagger Club, a notorious hangout for spies where information is as much a currency as money. An occasional partner-in-crime of hers is her cousin, Ho, whose brawn complements her brain. The range of activities Cinnamon has been involved in not known, but it is enough to earn her a noteworthy time in jail. Somehow, another spy by the name of Victor Luzer got hold of incriminating documents on her activities, in return of which Cinnamon helped him with a scheme of his. Though she kept her end of the bargain, he gave her false documents. Cinnamon shortly sided with the law-abiding side of the population to get her documents before returning to her spy activities.

While clever and organized, what sets Cinnamon apart from her colleagues are her eyes. One look is all she needs to ensnare a mind for as long as it pleases her. During this time, her victim's knowledge, memories, and actions are hers to decide on. There are, however, three limitations to her powers. The first is that her gaze can't get through sunglasses. The second limitation is that a victim needs to be in hearing range to receive instructions from her or else they'll just stand around in trance. There is a light suggestion she may have some telepathic control, but instructions in advance of a mission are her usual method. A third limitation is that Cinnamon can only control one person at a time, but she has it in her to outgrow this limitation. "DuckTales"

Mind games are Cinnamon's forte, whether by means of her unique ability or common manipulation. Employers regularly make the mistake to only count on the former and consider themselves in control as long as they avoid her gaze. That she might have her sleeves stocked with more than mesmerism does not occur to them, and that suits Cinnamon just fine. But just because Cinnamon is a master at what she does does not mean she herself is immune to the designs of others. If anything, Cinnamon is inadvisably quick to trust the people running along in her world and to assume her prospects will follow a straight line. It doesn't seem to come back to bite her that often, but when it does, she's got a problem she can't afford to ignore. "DuckTales" Fortunately, she is adapt at getting involved in new alliances that change the strategic facts drastically. "Dangerous Currency, Part 1"

Cinnamon Teal is a medium-to-tall, white-feathered duck. Her black hair is done in a pixie cut with a flower in it and she has a mole on her right cheek.

Cinnamon is in trouble when Victor Luzer comes in the possession of documents that could put her in jail. In exchange for the documents, Cinnamon agrees to use her powers to get him a new submarine by McDuck Industries currently being tested by the American Navy. She hypnotizes Donald Duck while he is on shore leave and gets him to bring her the hand-sized remote computer. Once he's served his purpose, she sends him out of the Cloak & Dagger Club shes's hiding at with no memory of the past hours. Cinnamon and Victor exchange the documents and computer, but she discovers that Victor has given her fake papers when he's already away. She also finds herself bothered by Scrooge McDuck and Donald's nephews, who seek to clear Donald's name and retrieve the computer, but with Victor's betrayal in mind she saves them from Ho to arrange an alliance. When Victor steals the submarine, mans it, and tries to sink the navy's ship, Scrooge, Cinnamon, and Donald join forces to stop him. It is Cinnamon's gaze that eventually incapacitates Victor and allows him to be arrested. In exchange, the Ducks get her the documents she has been looking for and she happily tears them apart. "DuckTales"

After a time working for John D. Rockerduck, "DuckTales" Cinnamon is recruited by Magica De Spell for the League of Eve-il along with Ammonia Pine and Camille Chameleon. As the four women search the caverns underneath St. Canard for a good place to set up a base, they discover the ink. Magica recognizes its potential and the group builds their scheme around the toxic substance. "Dangerous Currency, Part 3" After months of preparation, they infect the entirety of St. Canard with the ink, making it their personal playground to control from Quackwerks HQ. They also free several criminals in jail at the time to use as troops in return for ink-powered enhancements. On Magica's orders, Cinnamon sends Megavolt and the Beagle Boys to Audubon Bay Bridge where they've seen Scrooge McDuck and company going. Much to all villains' delight, they find the Gizmosuit there and steal it. "Dangerous Currency, Part 1" When Scrooge, Darkwing Duck, Gyro Gearloose, and Little Helper come to look for Magica, the League of Eve-il and their allies are waiting for them. The heroes escape, "Dangerous Currency, Part 2" but the League is flexible. They relocate the ink and their troops to Duckburg to keep the heroes in the defense. "Dangerous Currency, Part 3" What they don't expect is for the heroes to invent a device that shows the source of the ink, much less for it to open a portal to the wasteland. The ink turns out to be Negaduck after his body has been hit by the tronsplitter numerous times, which resulted in his consciousness to become stuck in the other dimension. He is freed and promptly takes control of the ink. Because of this, the ink lessens in power and the League of Evil agrees to team up with him to keep control of the situation. They, Negaduck, the Phantom Blot, and the Beagle Boys become one with the ink. They have the upper hand until the portal is reopened. It sucks Negaduck back to the wasteland and because the others are linked to him, they involuntarily follow to the other dimension. "Dangerous Currency, Part 4"