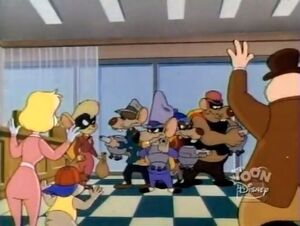 The Cheese Gang is an all-mouse quintet of criminals who use cheese guns as weapons. They mainly rob banks.

Only the leader of the Cheese Gang ever spoke. He is voiced by Charlie Adler.

The Cheese Gang are 1920s-1930s style criminals whose signature weapons are liquid cheese-spraying tommy-esque guns. They are simple crooks who are only interested in quick monetary gain.

The group enjoys a joke once in a while, in particular on the people caught up in their robberies.

The Cheese Gang tries to rob the Sitting Duck National Bank, but the joined forces of Darkwing Duck and his new D-2000 super-computer stop them. The police have them all taken to jail, from which they escape soon after. This time, D-2000 takes care of them alone. "Star Crossed Circuits" After a heist, the Cheese Gang finds itself pursued by Darkwing Duck and Launchpad. The heroes apprehend them by landing on top of their getaway car. "Fraudcast News"

The Cheese Gang becomes incarcerated in the St. Canard Maximum Security Prison for the Criminally Crafty. Along with all other inmates, they are freed from their cells by Negaduck to escape en masse and to hunt down a locked-in Darkwing. The Cheese Gang is sicced on the remaining personnel and journalists to keep them out of the way. "Orange Is the New Purple, Part 2"