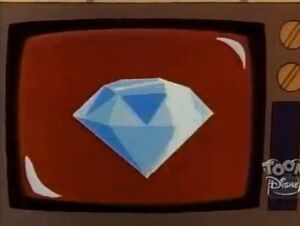 The Chameleon Diamond is a diamond of considerable size currently in the possession of Howell.

The Chameleon Diamond is a gem owned by Howell and on display in the Howell Wing of the city museum.

Ms. Howell has recently acquired the Chameleon Diamond, which gives Camille Chameleon an idea to distract and destroy Darkwing Duck. It would be obvious for her to steal the diamond, so she places a time bomb atop a statue of Howell in front of the city museum housing the gemstone. Given that she's not interested in the diamond, Darkwing will wait for her fruitlessly and get blown up in the end. Only because Gosalyn watches the full news report by Dan Gander on the diamond, notices "Howell"'s speech quirk, and realizes it has to be a trap is Camille's plain foiled. Calm a Chameleon

Retrieved from "https://darkwingduck.fandom.com/wiki/Chameleon_Diamond?oldid=21122"
Community content is available under CC-BY-SA unless otherwise noted.