Darkwing Duck Wiki
Register
Don't have an account?
Sign In
Advertisement
in: Stubs, Locations, A to Z 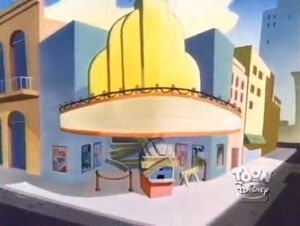 The Canard Multiplex Theater is an abandoned movie theater in St. Canard. It is the primary hideout of Tuskerninni and his penguins.

The Canard Multiplex Theater either has not been abandoned for very long or Tuskerninni makes a priority of maintenance. While disorderly in a few ways, all of its equipment still functions and is in good condition. "A Duck by Any Other Name" Presumably, the reason it got abandoned was the construction of a new building for the Canard Multiplex Theater's business, as there's a nearly identical movie theater elsewhere in St. Canard. "Negaduck" It is not the only hideout Tuskerninni has, but it is his main one.

"A Duck by Any Other Name" "Film Flam"