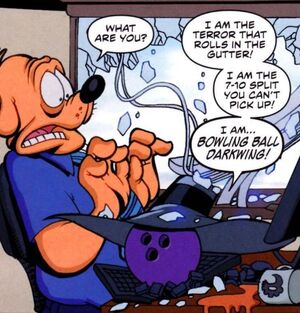 Bowling Ball Darkwing is a crimefighter in a dimension presumably inhabited by sapient objects. He is a "Darkwing" with considerable skill in reverse engineering.

As a sapient bowling ball, Bowling Ball Darkwing hails from a dimension of intelligent objects that possess mobility and manual control despite their lack of limbs. It is possible the variety of living objects of the dimension is limited to bowling-related ones. The dimension's version of St. Canard, at least, has a giant bowling pin as its St. Canard Tower. F.O.W.L. Disposition, Part 4 Like most "Darkwings", Bowling Ball has combat training, but possibly unique to him is his expertise at reverse engineering. Crisis on Infinite Darkwings, Part 4

Bowling Ball Darkwing is a somewhat small, purple bowling ball. His one piece of attire is the grey, wide-brimmed hat many "Darkwings" wear.

Along with many other "Darkwings", Bowling Ball is abducted by Magica De Spell and Negaduck (character) from his own dimension by means of the cross-dimensional transit system. He is hypnotized to serve the two villains and on their command attack the St. Canard of Darkwing Duck. When the duo unleashes the Darkwings, Bowling Ball crashes through the window of a Quackwerks office. Being a bowling ball, the mere fact he can talk is enough to terrorize the employee present. Crisis on Infinite Darkwings, Part 2 Bowling Ball Darkwing continues the rampage with the others until Quiverwing Duck undoes Magica's magic by taking the source absorber from her. The Darkwings have just enough time to recover from the mind control and form an army to be ready for the arrival of a Negaduck-Paddywhack fusion. They keep him surrounded until the tronsplitter is fetched to undo the fusion. Negaduck is destroyed, while the source absorber is used to channel the Darkwings love for Gosalyn into an influence that forces Paddywhack back into his box. With the day saved, Bowling Ball Darkwing puts his knowledge of reverse engineering to use on the cross-dimensional transit system so the Darkwings can all return to their own dimensions. Crisis on Infinite Darkwings, Part 4 Months later, Morgana searches for a dimension to fight Duckthulhu in. She comes across Bowling Ball's dimension, but lets it pass. F.O.W.L. Disposition, Part 4

Retrieved from "https://darkwingduck.fandom.com/wiki/Bowling_Ball_Darkwing?oldid=21840"
Community content is available under CC-BY-SA unless otherwise noted.