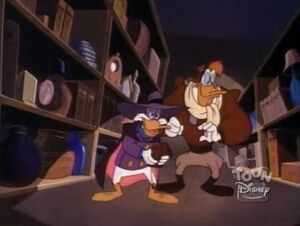 The Bob's World of Fragile Antiques is an antique store in St. Canard. Glue Gal has her day job there.

Glue Gal either is the owner of or an employee at Bob's World of Fragile Antiques. The store is spacious and stands on a corner, allowing it to have two entrances.

In pursuit of the Rubber Chicken, Darkwing and Launchpad enter Bob's World of Fragile Antiques. As the Rubber Chicken ends up stuck in a corner, Darkwing tries to take him out by throwing the antiques at him. Glue Gal warns him that what he breaks, he buys, and keeps meticulously track of every item damaged. Nothing hurts or incapacitates the Rubber Chicken and after a while he makes a run for it. Darkwing grabs his arms, but Launchpad, his head stuck in an antique vase, steps on the crimefighter and he has to let go. Gosalyn attempts once more to explain that the Rubber Chicken is innocent, but Darkwing doesn't believe her still. As he prepares to leave, Glue Gal stops him with a receipt of 10.000 dollars. Darkwing whines about just doing his duty, which results in Glue Gal talking about her own glue-based mutant powers. Darkwing calls it ridiculous, upon which she sticks the receipt to his beak and marches off in anger. Darkwing gets to leave without paying, but the matter is on the news that evening. Mutantcy on the Bouncy

Retrieved from "https://darkwingduck.fandom.com/wiki/Bob%27s_World_of_Fragile_Antiques?oldid=16004"
Community content is available under CC-BY-SA unless otherwise noted.