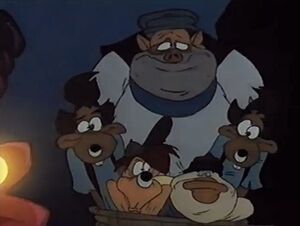 The biker gang is a group of five criminals that steal as many car parts as a car has to offer. Though they're professional in their felonious endeavors and their choice of crime is violence-free, bodily harm is plan A to plan Z when anyone gets pesky about stopping them. It's why they've got a problem when that doesn't work.

The five are well-organized car part thieves, "Darkly Dawns the Duck" but they may have broken up after being arrested by Darkwing Duck.

The gang is not hesitant to commit murder if anyone gets in their way. "Darkly Dawns the Duck"

The gang finds itself pursued by Darkwing Duck, who first takes out the pickup truck crew by crashing the Ratcatcher into their car, then the leader by letting him drive over an open manhole, and then the twins by hitting them with the manhole cover. The five are collected, tied up, placed in the passenger seat, "Darkly Dawns the Duck" and brought to the St. Canard Police Station. "Darkly Dawns the Duck"/"Darkly Dawns the Duck, Part 1" A few days later, Darkwing finds himself in prison, coincidentally in the same cell as the gang's leader. He confronts Darkwing, ready to take revenge, but Darkwing is aggressively self-pitying and orders the biker to pummel him into oblivion. This scares him and makes it a relief that Launchpad McQuack moments later busts Darkwing out. "Darkly Dawns the Duck"/"Darkly Dawns the Duck, Part 2" The gang leader gets out on his own at some point. He becomes one of the many victims of Quackerjack's and Megavolt's relaxitron and is willingly robbed while he attends a play at the Shubird Theater. "Stressed to Kill" During the time Darkwing is a wreck due to Gosalyn's disappearance, the gang leader steals a doll from a little girl who looks a lot like her. Witnessing this is what reinvigorates Darkwing. He chases away the crook and returns the doll, even though the girl is not Gosalyn. It is this event that causes Darkwing to return to crimefighting and improve his strategies to make St. Canard safe. Though because Gosalyn went back in time to undo her disappearance, this never happened. "Time and Punishment" The smallest member of the biker gang teams up with another crook to rob a convenience store from money and food. Darkwing thoroughly unintentionally thwarts their heist by smashing the doors open on them. "Jail Bird" The small duck and one of the twins are with another criminal as they try to outrun Darkwing Duck. He corners them in an alley, but leaves them to Launchpad when Bianca Beakley shows up to interview him. "Fraudcast News"

The gang takes a car apart for its parts until only a chassis is left. They try to get away with bags full of loot, but find Crocker bound and gagged, courtesy of Darkwing Duck. The leader saves and unties him and the whole gang flees on their motorcycles and in their pickup truck. Darkwing gives chase on the Ratcatcher and captures them by accident, after which he delivers them tied up at the St. Canard Police Station. "Darkly Dawns the Duck" Ironically, the gang leader becomes cellmates with Darkwing a few days later. He confronts Darkwing, ready to take revenge, but Darkwing is aggressively self-pitying and orders the biker to pummel him into oblivion. This scares him and makes it a relief that Launchpad McQuack moments later busts Darkwing out. On Darkwing's inquiry if he's going to use the circumstances to escape too, the gang leader assures him he's staying in prison as long as Darkwing roams outside prison. "The End of the Beginning!"

Retrieved from "https://darkwingduck.fandom.com/wiki/Biker_gang?oldid=27125"
Community content is available under CC-BY-SA unless otherwise noted.