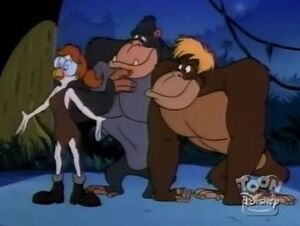 Doctor Beatrice Bruté is both an anthropologist and an agent for SHUSH. In either profession, she prefers the hands-on approach, putting herself into the thick of her mission to get her results. While there's a few things she couldn't do without, like tea and good shoes, the absence of many other luxuries does not hinder or discourage her. However, family and companionship mean a lot to her and seeing them endure loss is not something she can brush off as easily. Bruté favors primates as companions over people, finding in them kinship and loyalty. Adjusting to their way of life, such as learning their language and appreciating the fine flavor of crawling live ants on a stick, is not an objection or difficulty to her.

She is voiced by Victoria Carroll.

A versatile woman with a doctorate in anthropology, advanced athletic skills, and her name on the payroll of SHUSH, Beatrice Bruté is someone who goes places. This can be for research, a mission, or both. While her work for SHUSH may protect the world, it is her work with primates that brings her joy. Following her mission in Africa during which she teamed up with Darkwing Duck to put a stop to Major Trenchrot's plans, she stayed with the gorillas, among which Bongo and Congo, she met there. Whether she still works for SHUSH or has given up that career is unknown.

Bruté is easy-going and highly adaptable. Having no attachments to modern amenities, there are few circumstances she can't handle with unmatched grace, although cynical people might write her off as just nuts. She tries to look on the bright side of things and acknowledge what she has instead of lamenting what she hasn't, which allows her to keep going even when the odds are against her. That said, while she is inventive, there's the limitation that she has trouble finding offensive use in things that she enjoys.

Beatrice Bruté is a tall, slender woman with reddish brown hair and glasses. Ever since taking up living with gorillas, she's chosen to dress in simple fur dresses, though she's not giving up on socks or advanced footwear.

Bruté goes to spy on the activities of Major Trenchrot on an island in Africa for SHUSH and learns that he is planning to create a resort for criminals to spend their ill-gotten fortune. At the same time, Trenchrot discovers what she is up to and prepares to eliminate her. Bruté is saved at the last minutes by Bongo and Congo, two of the gorillas inhabiting the island and she goes to live with them. Because she has no means to contact SHUSH, she arranges nightly raids on Trenchrot's plantation to stop his progress and diminish his stash of weapons. It is a losing battle, but the tide turns when Darkwing Duck arrives in search of her. After some initial misunderstandings and the gorilla village being burned down by Trenchrot, Darkwing organizes a large scale attack on the plantation using primate punch, a drink Bruté and the gorillas love, as explosives. Trenchrot and his men are defeated and set to be taken back to mainland. Bruté opts to stay on the island with her gorilla family. Apes of Wrath

Retrieved from "https://darkwingduck.fandom.com/wiki/Beatrice_Brut%C3%A9?oldid=24778"
Community content is available under CC-BY-SA unless otherwise noted.