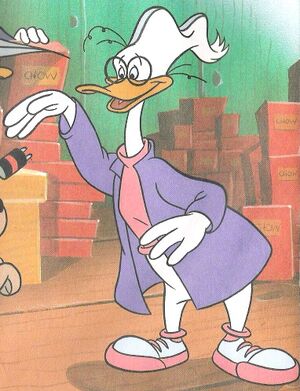 Doctor or Madam Anna Matronic is a mad scientist who, as her names suggests, is a technological genius who has animatronic robot puppies as her minions.

Matronic visits the island resort of Phineas Sharp to participate in the auction for the master list of SHUSH agents. The auction is ruined by the combined effort of Darkwing Duck and Derek Blunt. "In Like Blunt"

In an attempt to make her robot critters smarter, Madam Matronic ends up making a Silly Signal ray. Realizing what she can do with this weapon, she sends out her robot puppies and has them use the Silly Signal ray on the agents of SHUSH. When Darkwing investigates and finds Matronic is behind the scheme, he ends up getting captured. But before Matronic can blast him with the Silly Signal ray, Launchpad jumps in the way, managing to block out the ray's effects by turning on his radio headphones. When Matronic tries to figure out why Launchpad was not affected by the ray, she accidentally zaps herself with it, turning her silly. "The Silly Canine Caper"

Matronic works on making a mind-control helmet, but finds that the wearer of said helmet can only be hypnotized when he is asleep. Upon realizing this, she has her robo-hounds send Darkwing on a wild goose chase all over St. Canard until she gets to lock the helmet on his head. She at first intends to make the sleeping Darkwing steal all the money she needs to make more mind-control helmets, but she changes her mind to instead have him plummet to his doom from out her window. Fortunately, Launchpad and Gosalyn manage to wake Darkwing up right before he drops out the window, and he then smashes the remote Matronic was using to control the helmet. "Sleep Ducking!"

Matronic becomes incarcerated in the new maximum security jail in St. Canard. Along with all other inmates, she is freed from her cell by Negaduck to hunt down a locked-in Darkwing, although she's among those who stay clear of him. "Orange Is the New Purple, Part 2" This could be because she helps out with the construction of the railgun for the eventual breakout. Shortly before completion, the plan is sabotaged by Darkwing, who manipulates the powers of the Liquidator and Isis Vanderchill to capture all of his adversaries in ice. "Orange Is the New Purple, Part 3"