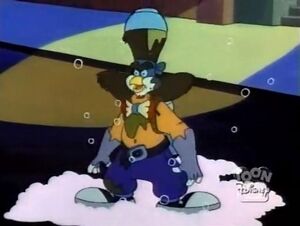 Nobody loves messes, gunk, and violating etiquette as much as Ample Grime does. It is her specialty and her asset in her function as agent of F.O.W.L.. Because she has a unique level of tolerance for filth, Ample is an ideal addition to the suit-heavy bulk of F.O.W.L.'s personnel. This includes Ample's very own sister, Ammonia Pine. Like her, Ample is a mechanical and chemical expert, but an unshared skill of hers is the potential to train vermin to do her bidding. Her one effective weakness is her fear of being clean, which takes away from her sense of identity and sabotages her focus on the mission.

She is voiced by Ellen Gerstell.

Ample grew up in a household with at least one sibling: her older sister Ammonia Pine. It is unknown why the two have different last names, provided "Ample Grime" and "Ammonia Pine" aren't code names to begin with. From a young age they developed the traits they'd utilize for crime in their adult years. Ample made a mess of everything and Ammonia dutifully cleaned up, often to the annoyance of Ample who considers Ammonia a wet blanket. Meanwhile, Ammonia isn't fond of Ample's filthiness and lack of etiquette. These frustrations with each other's habits have not undermined development of a healthy relationship. In fact, Ample and Ammonia are each other's prime compulsion exception. Ample does not like to come in contact with her sister's cleaning concoctions, but when she loses dirt to Ammonia, it bothers her less than filth usually does, and the same is true for Ammonia in regards to Ample's filth.

In her adult years, Ample was recruited by F.O.W.L. alongside Ammonia, although the duo's contrasting natures were acknowledged. For the longest time, they were assigned separate missions. This is for the best, as Ample gets gross like there's a Nobel Prize waiting for her. She is good both with machinery and chemistry and can create a wide variety of resources to muddy up her environment. Some of her filth concoctions are fit to make things stick while others are corrosive. It is not known if she ever aims to make people sick, though it is unlikely it's not at least a potential side-effect of her choice of weaponry. For that matter, her own disease resistance is not commented on, but would have to be impressive for her to not fall victim to her own devices. Ample also is a competent vermin trainer in the possession of a swarm of pet lice she can sic on her opponents.

Ample Grime is a garbage collector in the sense that she's literally a collector. She is a filth enthusiast who believes one can never have enough trash. Little delights her more than being covered with sludge or coating other people or objects, especially fancy ones, with goo which she can readily harvest from her own body. She also takes pleasure in disgusting people with her disregard for etiquette, such as by burping, snorting loudly, (armpit) farting, and taking off her shoes and socks if she feels like it. In her mind, her behavior is justified because everyone who does not share her ideas of fun is a spoilsport to be broken. The fact that she herself breaks down when she becomes clean does not register as a point for reflection. Her peculiarities might make her look lazy and undisciplined, but she's not one of F.O.W.L.'s best for nothing. She is dedicated to her craft and possesses a lot of technical know-how to create the nastiest muck imaginable.

Ample is a bird of average weight with either permanently dirtied white feathers or natural brownish feathers. She has a monobrow and a large amount of brown hair that she has done up in a club-shape around her head. A grimy blue bowl rests atop the upper knot as a makeshift hat. Her clothes are picked for comfort and are both a smidge oversized and covered in gunk. An apple core serves as her tie and the garbage gloves she wears, which match her tie mask, are fingerless. Ample carries around a garbage can modified into a backpack and presumably holds her weapons and trained lice herein.

F.O.W.L.'s financial resources are experiencing another hiccup, so Ample Grime is put on Emergency Extortion Plan 23B. She is to work on the project alongside Ammonia Pine. Though the two are polar opposites when it comes to hygiene, it is of less influence on their teamwork than their sisterly bond. They get to work building a machine that uses Ample's gunk to glue down pedestrians and Ammonia's vacuum cleaning technology to suck their belongings right from them. Darkwing crosses their path while they're gathering supplies at the rubber factory, but their superior weaponry has them sauntering away laughing. A second confrontation at the museum, where the F.O.W.L. agents go for a special gem to fuel their machine, ends equally disgracefully for the crimefighter. And the third time, at the docks, is still not the charm. By this point, Ammonia and Ample have nearly completed the machine. They drive it to the dump for the final bits and run a test with some broken-down cars afterwards. Consequentially, they discover Gosalyn and Honker hiding behind the wrecks and prepare to kill them. Darkwing and Launchpad intervene, but are glued down to a conveyor belt moving towards a trash compactor. The sisters leave the heroes like this and put Emergency Extortion Plan 23B into practice. They acquire some loot, but are stopped from completing the plan by the arrival of the heroes in the Nutquacker. Ample is taken out first by a blast of soap and Ammonia follows when the machine's vacuum cleaner mouth gets clogged with balloons, causing it to explode. Weaponless and in an accusatory mood, they are arrested. "Dirtysomething"