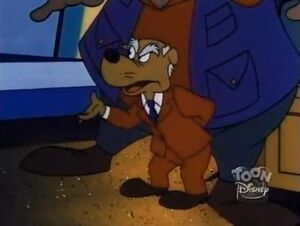 A. F. Erret is the owner of A. F. Erret Studios, a movie company that for the longest time was on the edge of bankruptcy.

He is voiced by Hal Rayle.

A. F. Erret Studios might very well be a family companying, as it dates back to at least 1925 and Erret has a distinct attachment to it.

Mr. Erret has anger issues and hates being referred to as Mr. Ferret, which happens a lot.

A. F. Erret Studios has a movie in the works, Space Duck: Attack of the Teenage Mutant Martian Mallards XII, directed by Tuskerninni. One of the movie's more expensive scenes is required to be redone due to the arrival of Darkwing Duck, who mistakes the alien abduction for the real deal. Erret himself goes ballistics on the crimefighter and is most displeased when Darkwing invites himself to a review of the night's events the day after. During a take, the leading man got zapped with a loaded prop gun and Darkwing claims to have a lead on the case. It becomes apparent the lead is nothing more than the shadow of a fly on the projector and Darkwing makes a hasty retreat as Erret shouts for the guards. Feeling the financial pressure on his company, Erret begins considering selling the studio grounds. He already has a potential buyer, unbeknownst to him Tuskerninni himself. The director's goal all along has been to make Space Duck: Attack of the Teenage Mutant Martian Mallards XII a bust in order to bankrupt A. F. Erret Studios and purchase it at a low price for the oil beneath the studio grounds. Only Gosalyn's intervention stops the negotiation. Tired, Erret goes to see how the movie's recordings are going and watches as Darkwing, now the leading man, is hit by a piano. He blames the misfortune on female lead Gloria Swansong for the destructive Phantom that stalks her, but has to swallow those words when shortly after he and Gloria are imprisoned by Tuskerninni. Darkwing and his team are added to the makeshift prison, which is surrounded by explosives, too, because Tuskerninni intends to rid himself of all of them. Then he becomes captured himself by the Phantom, Gloria's first husband Newt Glimmer, but Newt's villain exposition takes long enough that Darkwing can initiate an escape plan. Once Newt and Tuskerninni are dealt with, A. F. Erret announces that he'll invest the oil money into directing Space Duck: Attack of the Teenage Mutant Martian Mallards XII himself. Hush, Hush Sweet Charlatan

Retrieved from "https://darkwingduck.fandom.com/wiki/A._F._Erret?oldid=21277"
Community content is available under CC-BY-SA unless otherwise noted.