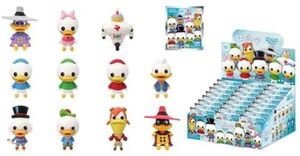 The 3D Foam Key Ring merchandise are blindbagged sets of key rings produced by Monogram. Each series's box contains 24 bags and each bag can contain one of nine figures plus any exclusive figures. Monogram has been licensed by Disney to produce key rings of their characters, the first of which went on shelves in January of 2015. In January of 2017, two Darkwing Duck figures have been added to the lineup in addition to nine DuckTales figures.

There are currently two main series divided by subseries in the lineup.

In addition to the above two, Monogram has incorporated two franchise-specific series.

The Disney DuckTales Series became available for purchase in January of 2017. It consists of figurines for Darkwing Duck, Webby Vanderquack, Gizmoduck, Scrooge McDuck, Flintheart Glomgold, Huey, Dewey and Louie, Launchpad McQuack as well as Fenton Crackshell and Negaduck as the exclusives.

Retrieved from "https://darkwingduck.fandom.com/wiki/3D_Foam_Key_Ring:_Disney_Series?oldid=22005"
Community content is available under CC-BY-SA unless otherwise noted.