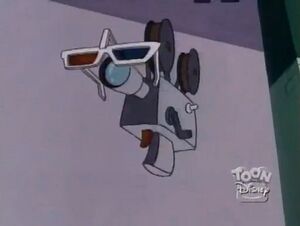 The 3-D projection gun, also called the film gun, is a weapon created by Tuskerninni. It has the ability to bring characters in movies to reality and send people into movies.

Tuskerninni and his henchmen dare the minds behind the 3-D projection gun, which allows passage from and to the realities of movies. How exactly the journey into a movie is accomplished is unclear. To get anyone out, the gun's beam is to be aimed at the character while the movie is playing. But the gun can also be used against anyone in reality without any movie around and they'll disappear. Possibly, the 3-D projection gun has storage capacity, at least enough to hold at least five individuals at once. It is not known what happened to it after Tuskerninni was defeated.

The first two movie villains brought to reality with the 3-D projection gun are a chainsaw-wielding zombie and a Western outlaw named the Snake-Eyed Kid. Darkwing Duck becomes involved in the case at this point and witnesses the third movie villain, a Martian named Mongo, step out of their movie. He, along with Launchpad and Gosalyn, track Mongo to Tuskerninni's hideout. A confrontation ends in favor of Tuskerninni's new henchman and the three heroes are tied up. Tuskerninni shows them the 3-D projection gun and explains that he is creating his own army of movie villains before bringing a fourth, the pirate Fleabeard, to life. Then he and the others leave, assuming Fleabeard to have an easy kill, but Darkwing escapes and defeats him. Tuskerninni, meanwhile, is working on getting himself Kongo, a giant ape, as his next recruit. By sheer coincidence Darkwing stumbles into them when they are stealing reels of Son of Kongo and the resulting fight has Tuskerninni temporarily lose hold of the 3-D projection gun. It hits the ground and pulls Andy Ape, a cartoon ape from Wacky Times, from the screen. Andy deals with Darkwing as Tuskerninni fulfills his plan for Kongo. On Gosalyn's advice, Darkwing goes after the 3-D projection gun to send all movie villains back to the screen, specifically Wacky Times. He also hits Tuskerninni after he threatened Darkwing with the gun, sending him into Wacky Times too. "Film Flam"

Retrieved from "https://darkwingduck.fandom.com/wiki/3-D_projection_gun?oldid=23485"
Community content is available under CC-BY-SA unless otherwise noted.