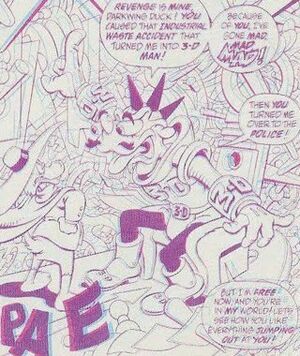 The 3-D Man is the ruler of 3-D World, but he wasn't born like that. At some point in his adult years, an industrial waste accident mutated him. The powers he gained from it, the ability to enter a world beyond and between the one he used to belong in, drove him mad and vengeful. He's not the kind of person who gets involved personally if he can avoid it. He prefers to have 3-D World do its number on those who get in his way.

It is unknown what 3-D Man's civilian identity was or what he did for a living before his mutation, but there's a good chance he already was involved with illegal activity to be around industrial waste and Darkwing Duck at the same time. Either way, he blames the accident and his transformation on Darkwing. A consequence of his mutation is a bite to his psychological health, but whether that is part of the physical change or due to him lacking the mental capacity to properly comprehend the added dimension is unclear.

As the 3-D Man, the villain firstly is some level of aware of his existence as a being of fiction, a trait only shared with Splatter Phoenix. He has access to 3-D World located past the panels and borders and can engage with the reality of the story on a meta level. How much of his power is actually useful outside 3-D World is unclear. His confirmed abilities are exclusively supporting skills like spying, 2-D to 3-D portal control, and forcing people through the portals. In his own domain, 3-D Man has more fourth wall influence, but his potential is limited by his imagination. Those he brings into the three-dimensional landscape get some control of their own over the meta of the fiction, which he either can't stop or doesn't care to.

3-D Man is not the man he used to be anymore and it stings. He's not had time to come to terms with everything that happened to him or fully explore the powers he has come in the possession of. Volatile as he is, he doesn't grant himself the room to collect his thoughts either, having a single-minded need for revenge.

The 3-D Man may or may not have lost his color due to his mutation. What is certain that it did is extend his eyes, or give him the ability to extend them. They usually reach as far as his dog nose and his eyebrows always float detachedly just above his pupils. The eyes can move around, which he uses to look past panel borders. He's tall, got a small moustache, and his hair is styled into three spikes forming a row. His villain outfit is a tunic with tights, mask, boots, and gloves; all of which have "3-D" displayed on them.

After undergoing mutation, descent into madness, and incarceration due to Darkwing's meddling, the 3-D Man wants revenge. He escapes from jail and finds Darkwing as the comic story commences. He waits until the hero sit down to read the St. Canard Gazette and notice the headline "3-D Man Escapes from Jail!", then pulls him into the 3-D World through the paper. Launchpad, who witnesses the abduction, follows voluntarily, which is fine by the 3-D Man. He leaves past the pages framework to let the 3-D World deal with the two heroes, but it doesn't go as planned. At some point, Darkwing starts shouting insults at him, provoking him back into the panels. Before he can retaliate, Honker activates the portable black hole he brought along when he and Gosalyn joined the adults. 3-D Man is swallowed by the darkness and with him 3-D World disappears too. Son of the Return of the Revenge of the 3-D Man

Retrieved from "https://darkwingduck.fandom.com/wiki/3-D_Man?oldid=20575"
Community content is available under CC-BY-SA unless otherwise noted.